Before we get started, let’s make something clear: I only got my hands on the brand spanking new Huawei P40 Pro this morning. Everything in this article is based off a couple of hours of use, so is meant for more of a guide of what to expect, than an in-depth analysis of the phone.

Also, if you’re looking for a breakdown of the Huawei P40 Pro’s specs and everything that’s new, I suggest you head over here. Napier, my glorious colleague, did a fantastic job of covering all the details you need to know.

Anyway, now that bit’s out the way, let’s get into some first impressions of the Huawei P40 Pro.

First things first, the Huawei P40 Pro is a gorgeous. It’s one of the few times in recent memory I pulled a handset out of the box and made a little “oohhhh” sound. Also, the color on the back really is eye-catching: 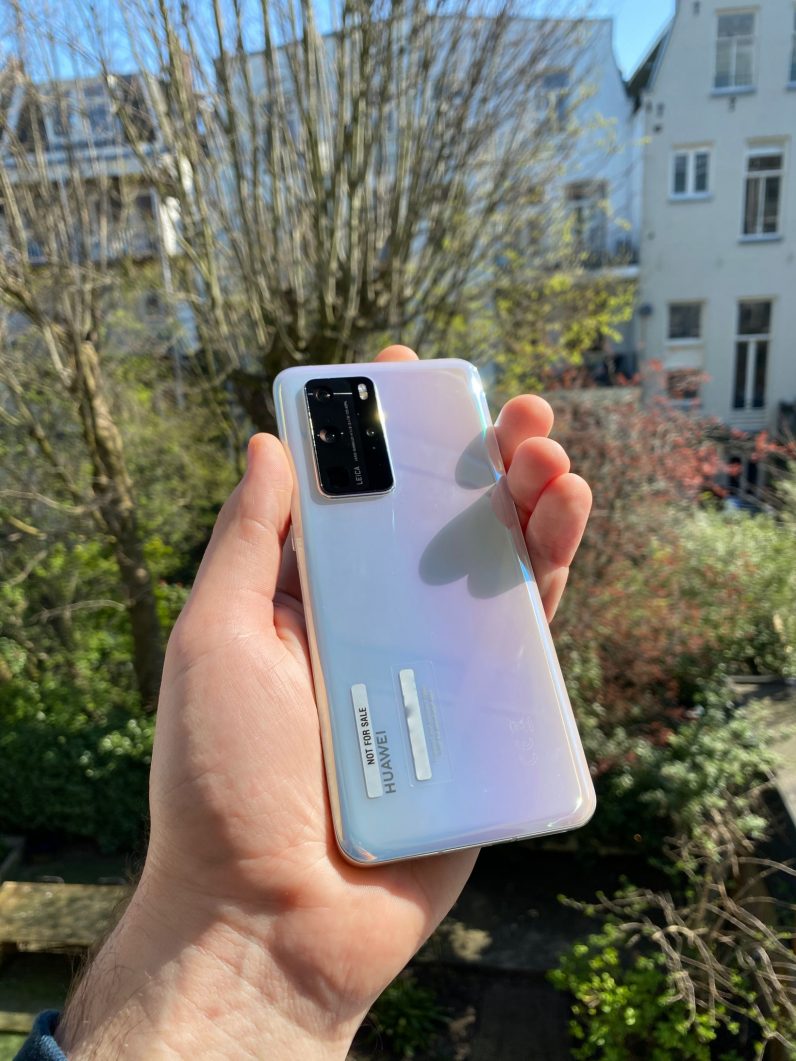 In the sunlight it shimmers.

I also dig how camera bump on the back looks. Huawei said it was influenced by makers of standalone cameras with this design and, to me, it really works. 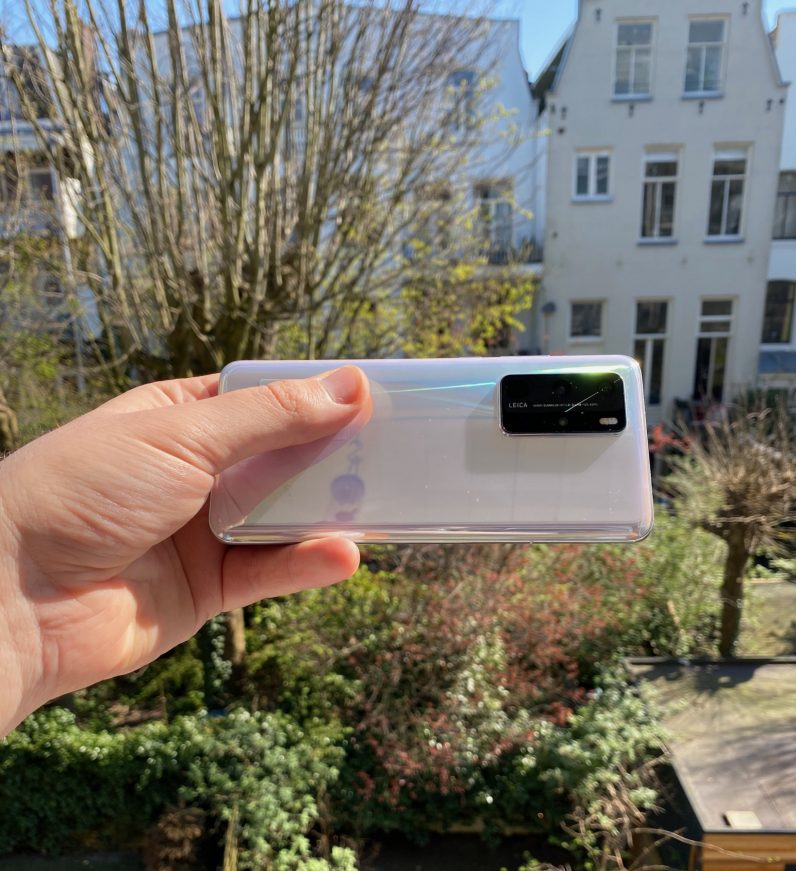 I think this is probably an acquired taste, but lord, I’ve definitely acquired it.

In general, the Huawei P40 Pro also feels lovely in your hands

It has a nice weight and is the perfect size for my hands. The only thing I have an issue with is with that aforementioned camera area. While I like how it looks, it’s big enough that my hand has bumped against it a few times and I’ve had to adjust my grip. A minor grievance, but still a grievance.

But, it’s important to note, this is only without the included case. When I put that on, the bump was far less pronounced. 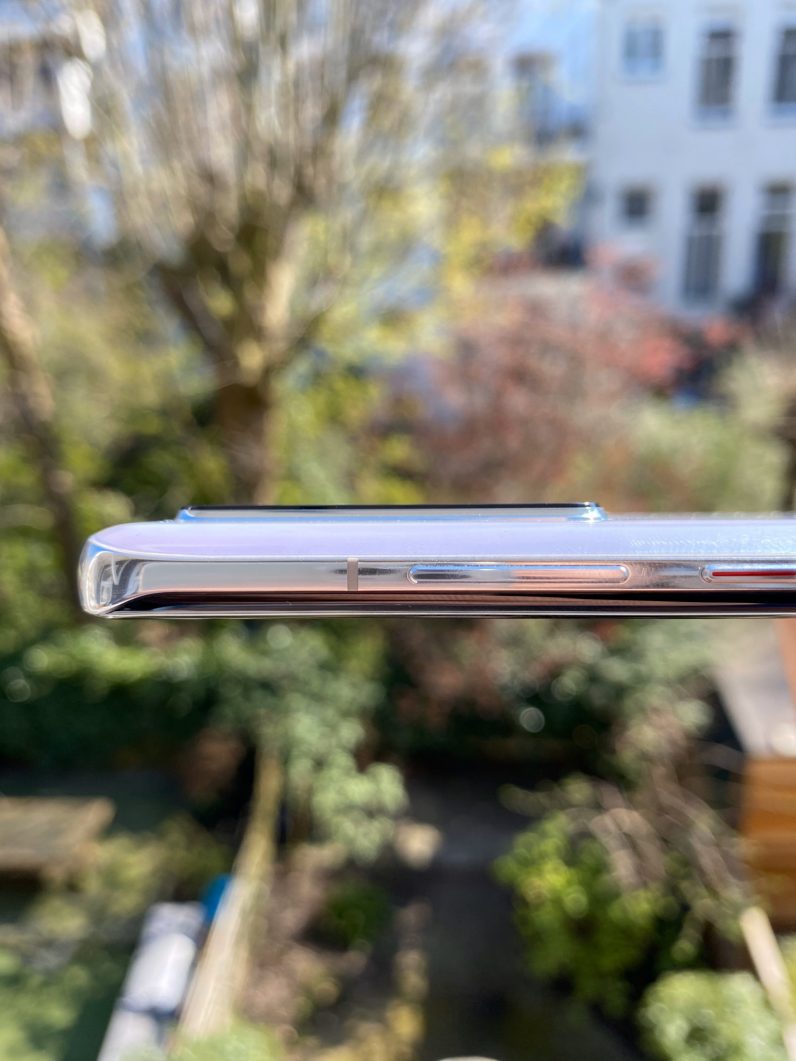 This is without the case, and while it might not look huge in this shot, it’s definitely THICK in reality.

The set-up process is dire

Basically, it was too long, and unwieldy. It involved me having to agree and give permissions to a whole load of apps and services I wasn’t too familiar with.

This though, was simply an inconvenience. I understand that since the US ban and the lack of Google Mobile Services (GMS), I’d be faced with some new things from Huawei.

It got bad when I was almost finished setting up the Huawei P40 Pro and then a screen flashed up trying to get me to install a number of apps — none of them I knew. It feels downright spammy and not what I want from a premium smartphone.

This same issue was repeated when I opened up the AppGallery (Huawei‘s answer to the Play Store). I’m sure some people don’t mind this, but I found it incredibly off putting.

The best way I can put it, is that setting up the phone didn’t feel like an experience, it was a fiddly task.

With the Huawei P40 Pro, the company introduced some new features, the most noticeable being swipe gestures. This should be pretty familiar to iPhone users, as it means you can run your thumb from the edge of the screen to the center to go back, or from the bottom to go to the home screen.

This feels pretty intuitive, but isn’t quite as smooth as the iPhone 11 or the Pixel 4. This could change in the future, but, as of now, it doesn’t deliver the premium experience I’d want from a phone in this range. 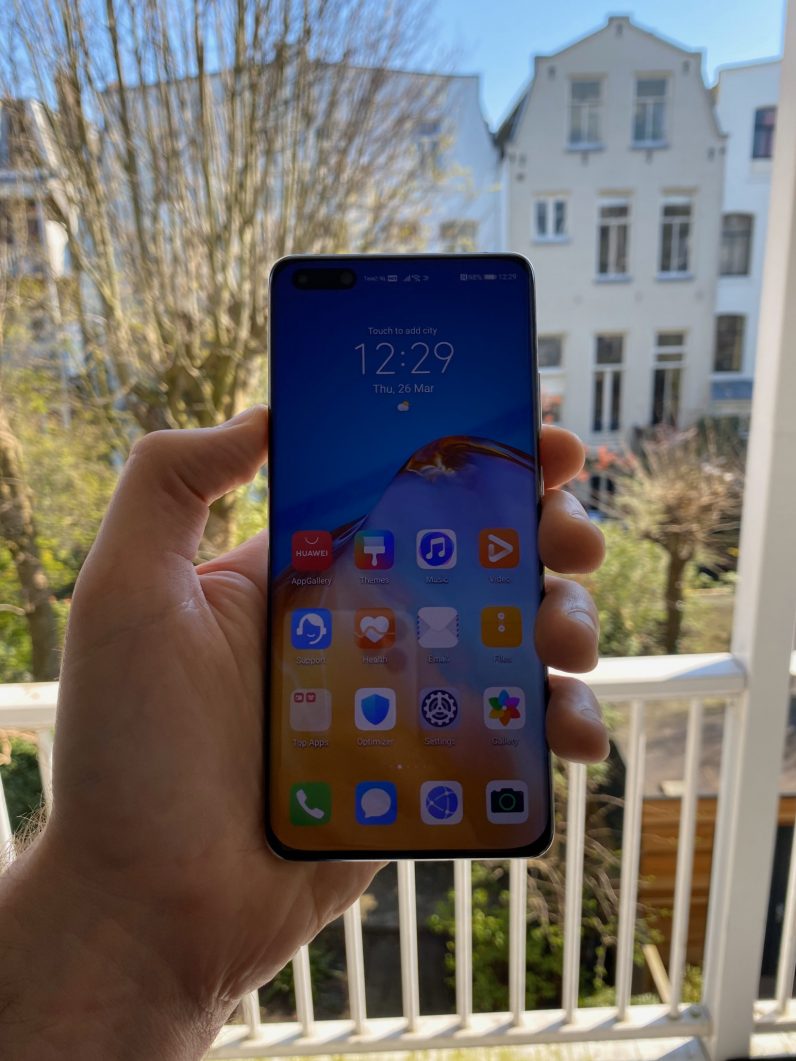 Nothing too wild about this, but thought you might want to see it.

First off, the screen itself is delicious. It delivers a crisp and rich viewing experience that’s the equal to any phone display I’ve used.

I’m still on the fence about the ‘waterfall’ element though. Basically, this is a new feature where the edges of the screen curve at the sides to give you a fuller viewing angle. Again, this is something I could get used to, but it doesn’t feel quite right at the moment.

This could be down to the software — I’ve found certain parts of apps being warped by the ‘waterfall’ edges — or down to me just not being used to it yet. To be honest though, I’ve been finding typing a real hassle, specifically with symbols on the edge of the screen — something that really shouldn’t be an issue.

Aesthetically, the curved display is a nice touch, and it’s nice that it’s doing something a bit different, but the jury’s still out.

I’m dead excited about getting my teeth into the camera

As I’ve only had my hands on the Huawei P40 Pro for a few hours, I’ve not had a chance to venture outside and take some proper snaps with it. You know, we are living through a lockdown after all.

But, I’ve played about with it indoors and taken a couple of snaps and, well, I’m excited. This could well be the best camera we’ve ever seen in a smartphone. 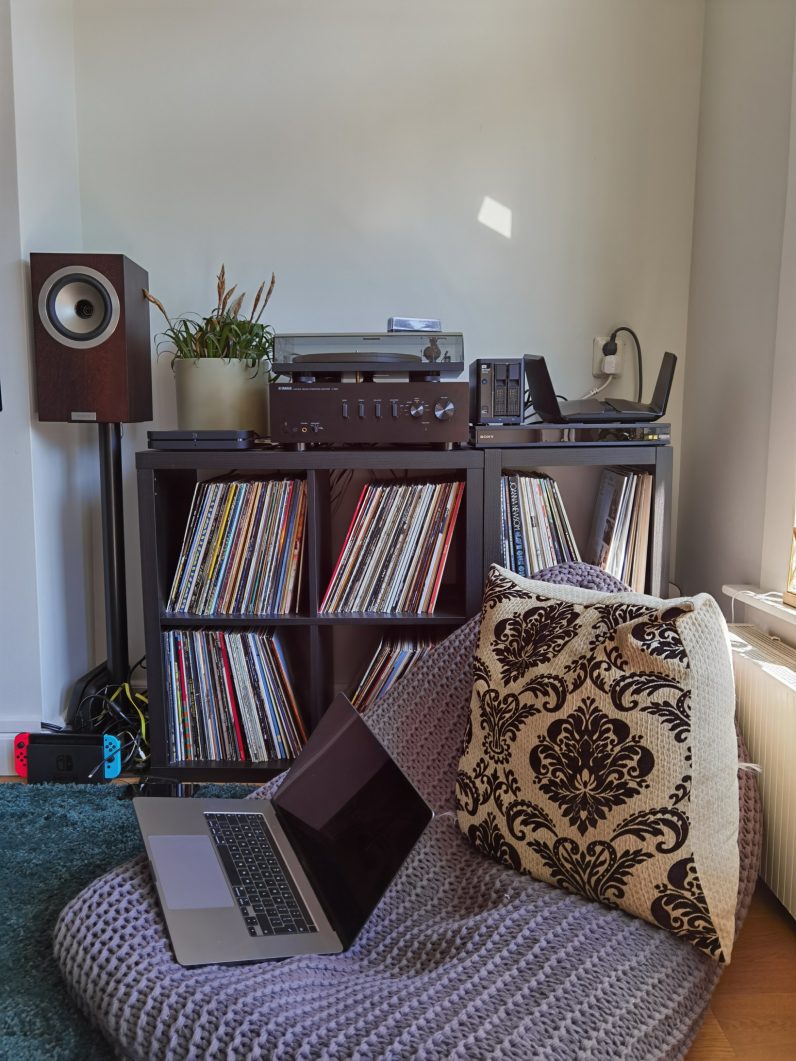 This isn’t technically a good photograph (I haven’t gone outside today), but I think it does a good job of showing how the phone picks up textures and colors.

And one more for your sins: 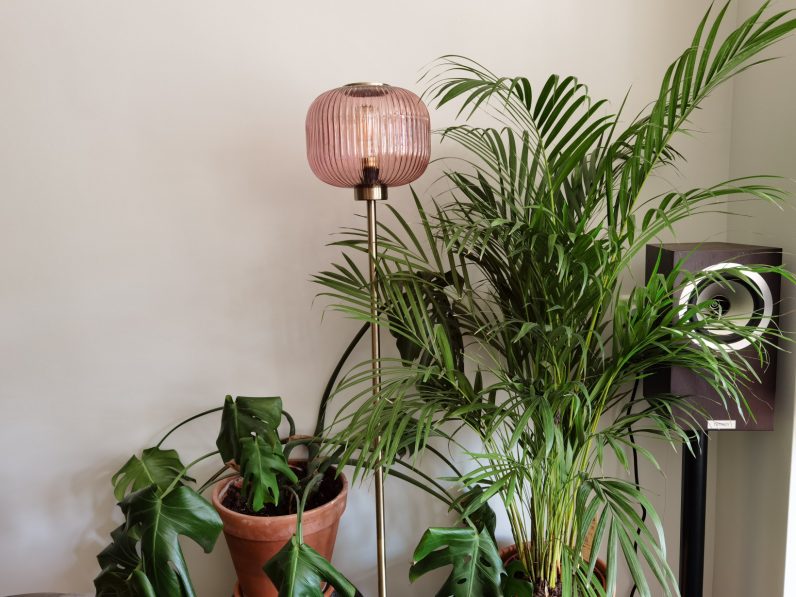 Again, not a breathtaking shot by any means, but I like how it picks out the greens.

Stay tuned, because we’re definitely going to put this through its paces, like we did with the P30.

The lack of Google apps and services is, at the moment, a real killer

Honestly, as good as the hardware is, I think I’d struggle recommending the Huawei P40 Pro as a daily driver to anyone in the West.

It surprised me how much I rely on that central selection of Google apps to undertake my daily tasks, and, if I’m honest, the Huawei replacement apps are nowhere near up to that standard. The Huawei Browser is crap, the Mail app can’t hold a candle to Gmail, and there’s no current equivalent to Google Maps.

As bad as this is, it’s also not the entire story.

I’m sure these experiences will improve and better apps will be developed, but I’m so embedded in that Google ecosystem, pulling me out of it is going to require a lot of work. In the future, this could be possible. But right now? The Huawei P40 Pro is good, but it’s not good enough to make me want to leave this world behind.

It’s important to note things aren’t terrible though. When I transferred my data to the P40 Pro using PhoneClone, it brought across a whole load of apps that aren’t currently available on AppGallery, including Facebook and Twitter.

If you’re moving from an Android phone, this makes entering the Huawei ecosystem a bit easier, as you’ll be able to keep most of your favorite apps. 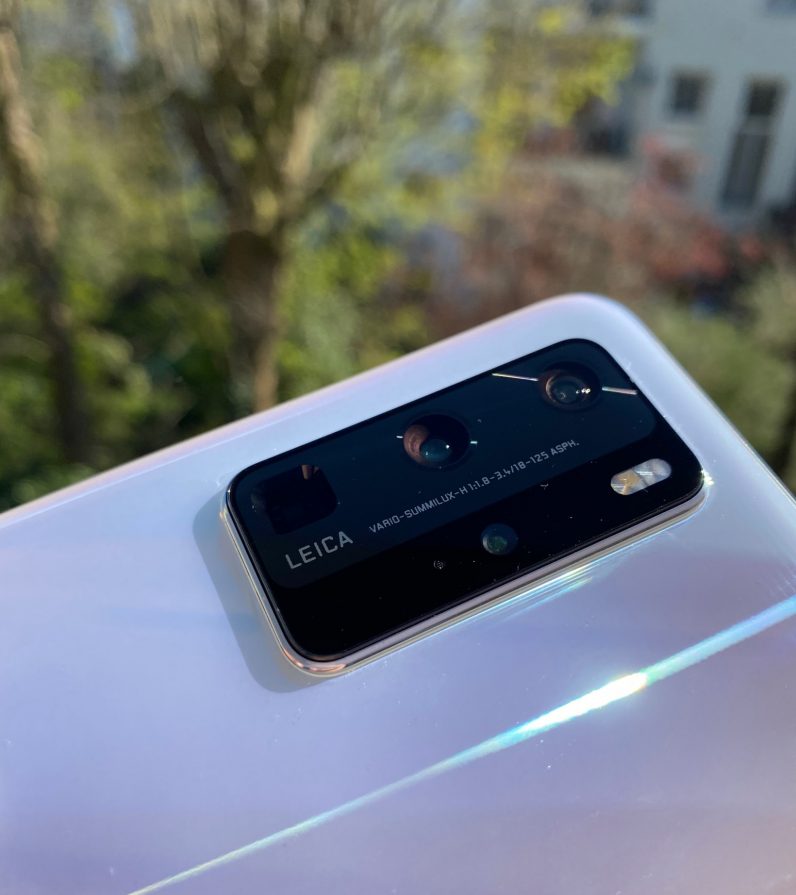 Just thought this was cute.

Basically, the Huawei P40 Pro is a beast of a handset. It has a lovely screen, feels great, and — at this stage at least — the camera seems like it’s something special.

The problem is the software, and not just the fact there’s no support for Google services. Compare to devices like the iPhone 11 and Pixel 4, the P40 Pro isn’t as slick or seamless. This doesn’t mean it’s bad, just that it’s not quite at that level.

Software can be worked on and improved, something I expect to see happen soon.

Still, these are just some first impressions, make sure you keep an eye on Plugged for some more in-depth thoughts over the coming weeks. 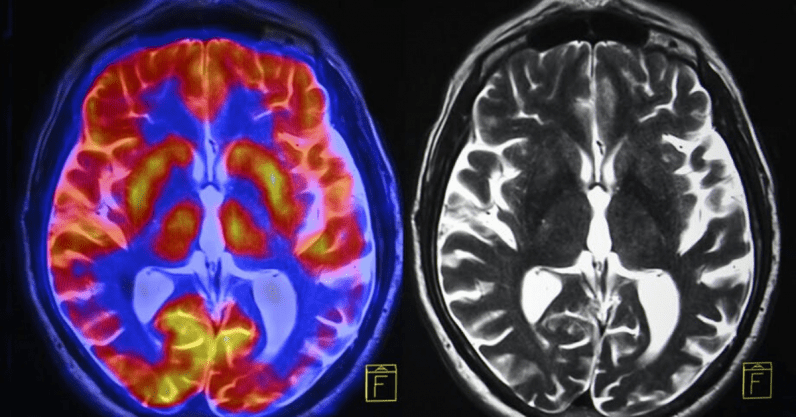